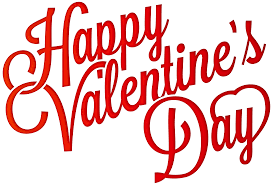 Probably many of you know the story of the origin of Valentine’s Day, but, let’s go over it again one more time.

St. Valentine, according to romantic legend, was a kind-hearted Roman Priest who married young couples against the wishes of Emperor Claudius XI. He also tended to the sick and wounded Christians who were imprisoned During Claudius XI’s reign. He was arrested and ordered to renounce his faith. Because he refused, he was beheaded on February 14th. Not a very good setting for a valentine theme but the young couples he married were thankful for his intervention down through the years.

During the middle ages in France and England, February 14th was associated with lovers because on this date, birds would pair off to mate in the spring. (I like this legend better.)It was common on February 14 to send a Love token or letter to your desired mate.

Remember all the people you love, not just your spouse, or boyfriend/Girlfriend, but also your family, friends, and those who are less fortunate. Don’t let February 14th be the only day you recognize that love.

Here is a lovely poem to send to someone you love:

Valentine day gives me a reason, to express the feelings I think about but don’t say,

about people who enrich my life, in unique and meaningful ways.

You are this kind and special person. When I think of you, my thoughts are warm and fond, and filled with admiration

I feel blessed to know you. May your valentine’s day be filled with love and respect you deserve.

Thought for the day: A true friend is someone who reaches for your hand and touches your heart.