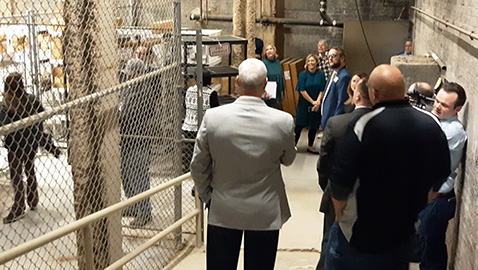 Several items on the Knox County Commission’s work session agenda are noteworthy this week including the vote to approve the Memorandum of Agreement between board of education and the county to relocate the school system’s central offices to the TVA East Tower. The commission meets Tuesday at 5 p.m. rather than tonight because of President’s Day.

That 5-3 vote came last week and the final approval by the commission is on the agenda. The final agreement between the county and TVA hinges on either an opinion by the Tennessee Attorney General and passage of a resolution in the state house and senate.

Mayor Glenn Jacobs said the move will save the county money. While there was some initial opposition in the commission to the move and the sale of the Andrew Johnson Building the vote is expected to approve the agreement.

The vote will be followed by a vote on the sale of the Andrew Johnson Building for $6 million to BNA Associates. Knox County Finance Director Chris Caldwell said Thursday that the building has been appraised for insurance purposes at $15 million. A 15- year tax break is expected to be requested by the buyer and the assessed property value tax has yet to be set on the building but it would be added to the tax rolls for at least $6 million during the tax incentive period, bringing in some revenue.

BNA plans call for $43 million to go into buying and renovating the history old hotel structure.

Items discussed during the work session are set by the chairman and commissioner requests.

Also on the agenda is a discussion requested by Commissioner Brad Anders regarding the county pulling out of Knoxville-Knox County Planning and forming its own planning organization. The idea has been brewing on the commission for the past several years. Currently the county has eight members on the joint planning authority and the city has seven.

Some commissioners and developers have had difference with the planning commission over regulations and enforcement issues.

The commission may also discuss requesting a corridor plan for Alcoa Highway on a request from Commissioner Carson Dailey, hear reports on the state of housing and affordability by Jennifer Roche of the Knoxville Area Realtors, and hear from Health Department Director Dr. Martha Buchanan on indigent care.