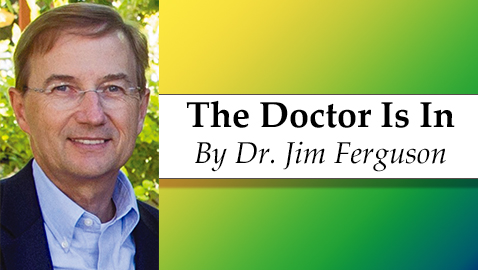 If you don’t stand for something, you’ll fall for anything.

By Dr. Jim Ferguson
In the 1720s and 1730s a movement swept the American colonies which historians would call The Great Awakening. Largely, it was a reaction to secular humanism and rationalism of 16th and 17th century Enlightenment philosophy which emphasized reason and the perfectibility of man while deemphasizing spiritual perspectives.

Deists like Thomas Jefferson and Benjamin Franklin ascribed to the notion that the Creator was like a watchmaker who built the universe, set it in motion and then retreated back across the cosmos. Deists accepted God as the Creator, but held that Earth was the purview of man.

Early 18th century Americans found religious institutions as staid and impersonal. Church attendance was falling and many sought a return to piety (godliness). The people sensed that the pursuit of money, power and prestige was what I might call idolatry. Pietism struck a nerve which shaped the landscape of the colonial period and “had a lasting impact on Christian denominations and American culture” (history.com).

You may remember Johnathan Edwards’ famous 1741 sermon, “Sinners in the hands of an Angry God.” Another sermonizer of the Great Awakening was George Whitefield, who had such a commanding voice that Ben Franklin calculated he could be heard by an outside audience of ten thousand. Edwards preached repentance and Whitefield encouraged people to rejoin churches. Though Franklin remained a Deist, and somewhat a skeptic, he and Whitefield became friends.

You may not remember that there were Second and Third Great Awakenings in the 19th century. Revivals were important to the awakening movement. Piety “brought comfort in the face of uncertainty as a result of the socio-political changes in America” (Wikipedia). Preaching social reform, a personal connection with God and salvation within church structure promoted Protestant denominations such as Methodists and Baptists.

I’ve been a lot of -isms. I was born into the Presbyterian faith and attended a Presbyterian Church through high school. And then I became so smart I didn’t need the Father. Well, the “prodigal” found out how foolish that was and I rediscovered my faith. I soon married a Methodist woman who also began her life as a Presbyterian. So, my journey has been circuitous. I have been “elected,” sprinkled, lost then found, saved and “dunked,” and now I am blessed!

My wife Becky is a genuinely good person and more of an optimist than me. In fact, her optimism balances my skepticism. (These days, I sometimes think I border on cynicism.) Becky thinks we are on the verge of things turning around in our country. Perhaps we are on the cusp of the Fourth Great Awakening.

Only a fool and CNN can think that things are going well in our country and the world. As this essay goes to the publisher, iPOTUS and his administration continue to enable illegal alien children to cross the border. These children are then bused to Dallas where they are put on airplanes and flown all over the country, including Chattanooga. There is a federal law which prohibits the transportation of children across state lines without identification, parents or legal guardians. I am not a lawyer, but it seems to me the anti-trafficking statute is being violated. But then there are so many laws that are being violated, a cynic might ask, “What difference does it make?”

My family and church have sponsored legal immigrants. We know what it takes because we’ve done it while following the law. I remember a discussion in my Sunday school class regarding the support of a legal immigrant family. A progressive class member was all in favor of immigrants, but refused to have any personal commitment, “preferring the government fix things.” How’s that working out big boy? I object to people telling me what I should do when they refuse to commit themselves. Hey, Joe and Jill, there is lots of room in the White House for the kids who need shelter.

Biden is great telling people what they should do, while he floats above the messes he makes. He told Israel’s President Netanyahu that he should stop making war on the Palestinians who are reigning missiles down on Israel. I don’t blame the president of Israel for ignoring iPOTUS as does China and the rest of the world.

I had dinner with a friend last week. This self-made man with a high school education and street-smarts developed a prominent business in Knoxville through hard work. He told me he is selling his family business because of inflation and the new tax laws that are coming from iPOTUS’ handlers and progressives. With inflation everything costs more, so everyone pays more. Taxing the rich is effectively taxing everyone.

My Becky says “Eyes are opening.” She notes that President Trump’s Operation Warp Speed produced vaccines which are defeating Covid. And even closer to our home is an extended family member who recently became deathly ill and was saved by modern American medicine and surgery. I have done extensive medical work in Central America and can tell you our family member would’ve died elsewhere. And an eye-opening tribute to the goodness of Americans is the money pouring into the go-fund-me page we set up to help Chef Don and his wife Lauren pay his medical bills, save their small business and their family.

Don and Lauren are hard-working, good people and true Americans. When I encounter a leftist, who is trying to bash America, I challenge them with the simple phrase, “I do not accept your premise.” I do not accept the premise that Americans are selfish, racist, unworthy or bad. Of course, there are always exceptions to every rule, but I do not accept that cops are bad. Nor am I a racist or a white supremist because I am Caucasian. Actually, BLM is inherently racist because they see everyone as a person of color. Martin Luther King must be turning over in his grave.

If you would like to join the Fourth Great Awakening feel free to say no to “woke “corporations like Coca-Cola (I did). Stand up and refuse to accept the perverted premise of America-hating leftists and BLM. And feel free to contribute to Chef Don’s rescue at https://gofund.me/1147ff0a

All are worthy causes.