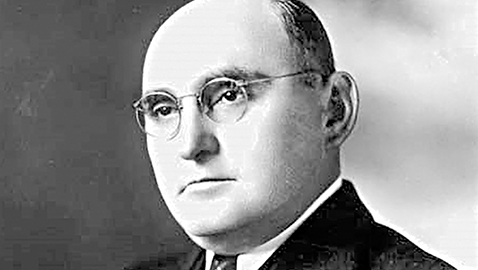 The trio of colorful legislators who exerted enormous influence in the Tennessee General Assembly for decades – – – Walter M. “Pete” Haynes, I. D. Beasley, and James H. Cummings – – – were commonly known in Nashville as the “Triumvirate” or “the Unholy Trinity.”

The late John Bragg served in the State House of Representatives for thirty years, retiring in 1996.  Bragg remembered the three legislators who all represented rural counties.  Describing Beasley, Haynes and Cummings as “a powerful rural coalition,” Bragg said the three “could pretty well manage what went on in the General Assembly for many years.”

Bragg recalled I. D. Beasley’s special talent of mimicry, which became legendary, earning him the nickname “The Mockingbird of Capitol Hill.”  Reputedly, Beasley could mimic virtually anyone, man or woman.

“I. D. Beasley could imitate anyone,” Bragg said, “but especially the late governor Austin Peay.  So freshmen lawmakers would get calls late in the evenings from Governor Peay telling them to go down to the governor’s mansion to see him immediately.

“Then when they would get to the governor’s house, the governor would come to the door and the poor freshman lawmakers would be standing there all embarrassed and red-faced.  Governor Peay would say, ‘You poor fella, you’ve been called by I. D. Beasley.”

It was true I. D. Beasley was a gnome of a fellow, standing about 5’3 and weighing around 230 pounds.  Balding, with rimless eyeglasses and a cigar usually stuck in his mouth, Beasley represented Smith County in either the Tennessee State Senate or the House of Representatives from 1921 until his death.

Beasley’s brother Clint, who served as Smith County judge, believed I. D. was self-conscious about his height and weight, which impaired his ability to be a truly excellent courtroom lawyer.

When he finally arrived in Nashville, I. D. Beasley promptly introduced a bill making daylight savings time illegal in the State of Tennessee.  It was Beasley who wrote the bill which outlawed religious snake handling in Tennessee.

Beasley was a bachelor and lived at the Walton Hotel in Carthage, Tennessee (which still stands there today).

When friends teased him about being a bachelor, Beasley would glance at his ample stomach and retort, “I wouldn’t have any woman foolish enough to marry me.”

The legislator from Smith County was a gourmet who regularly ordered “gallons of shrimp and oysters” fresh from New Orleans fishermen; Beasley also purchased “the best of fresh vegetables, beef and pork” from Tennessee farmers.  It was not unusual for I. D. Beasley to telephone a friend, one of his several sisters, or his mother to invite himself for dinner, but he did not come empty-handed, invariably arriving with “great paper sacks of food.”  Once the food was prepared, I. D. would “bury it in a snowstorm of salt and pepper.”

Beasley was a man whose friends and family readily admitted had a need for human companionship.

“So long as there was anyone awake to talk to, Beasley didn’t sleep.”  It was said human fellowship was “like food and drink” to the Smith County legislator.  Those he loved the most were also those he gave the least rest.  A fact confirmed by former attorney general Baxter Key, who said, “He almost drove me wild.  One day a stranger came to town looking for me and I. D. told him I was deaf – – –  that I could hear only if he shouted at the top of his lungs.  That was 30 years ago and I can hear it yet.

“Sometimes, I notice a certain strange quiet in the air and I remember that I.D. is gone,” Key sadly confessed.  “I miss him.”

Beasley’s hometown of Carthage was his political bailiwick and there was no doubt of his personal popularity with his home folk.  While the story might be apocryphal, it was widely repeated and quite possibly could have happened.  Governor Prentice Cooper was being chauffeured back to Nashville when his limousine was stopped in Smith County by an elderly flagman.  The flagman refused to allow the governor’s big, sleek limousine pass.  Easily irritated, Governor Cooper got out of the car and angrily demanded the flagman wave him through.  “Listen,” the old man snapped, “I wouldn’t let you through if you wuz I. D. Beasley.”

As to Beasley’s astonishing ability to mimic someone, it was said all it took was the legislator hearing a short conversation “and could do it so well the subject’s wife couldn’t tell the difference.”  Once needing an extra vote to pass a bill, I. D. Beasley stood on the steps of the Capitol “impersonating Gov. Austin Peay to a blind legislator and got the man to change his vote.”  To amuse himself, I. D. would telephone other lawmakers during the evening hours and would sit on the floor of the legislature trying valiantly to hide his mirth, his enormous stomach roiling with hidden laughter, as he watched dozens of his colleagues angrily accuse one another of having double-crossed each other.

No one was safe from I. D. Beasley’s pranks and sense of humor.  “Mr. Jim” Cummings often roomed with Beasley while staying in Nashville and awoke one night to see an agreeable drugstore clerk frothing from the mouth a foot from his face.  The clerk wore a wild expression when I. D. switched on the lights in their hotel room and Mr. Jim leaped out of his bed in terror, grabbing a chair and shrieking, “Kill him!  Kill him!”

Bored while sitting inside Nashville’s Elk’s Club, I. D. happened to spy an eighty-five-year-old gentleman who was notorious for his continued interest in the fairer sex.  I. D. watched the old man go to his office and promptly snatched up the telephone.  Getting the randy old man on the line, I. D. pretended to be one of his girlfriends and said she was on her way to his office.  Having an excellent view of the old man’s office, I. D. rumbled with laughter as he watched the old gentleman shoo out his callers and begin tidying up his office.  I. D. reached for the telephone and made a second call.  “This is Governor Peay,” the voice boomed, “I’m coming right down to have a look at your books.  Won’t take a minute.  I’m on my way.”

Highly alarmed, the old lecher rushed from his office to the sidewalk in an attempt to head off his girlfriend in anticipation of the governor’s arrival.  I. D. watched with delight as the old man stood helplessly on the sidewalk, growing more and more frustrated when neither the woman nor the governor showed up.

When I. D. Beasley first arrived in the legislature to represent Smith County, Alf Taylor, a Republican, was governor of Tennessee.  Beasley served a total of thirteen terms in the state legislature; eight in the Senate and five in the House of Representatives.  Beasley’s record of service was only surpassed by that of Jim Cummings decades later.  Beasley had no legal name aside from his initials.  After graduating from David Lipscomb College, Beasley eagerly volunteered with his friend Baxter Key to fight in the First World War.  After returning from France, I. D. taught school for a few years and then decided to go into politics.  Beasley won his first race for the State Senate after campaigning throughout his district on horseback.

Beasley maintained a host of friendships, which included Senator K. D. McKellar, Cordell Hull and James A. Farley, Chairman of the Democratic National Committee and Postmaster General during President Franklin Roosevelt’s administration.  An amiable fellow most of the time, I. D. Beasley managed to wield influence irrespective of who Tennessee’s governor might be.  Even Jim Farley was not spared Beasley’s sense of humor.  Sent to Tennessee by Cordell Hull, Farley attended “Mule Day” in Columbia, Tennessee, one of the largest annual events in the state for Democrats.  Returning to his Nashville hotel room after a long day, Farley’s telephone rang and he was surprised to hear Hull’s voice on the other end of the line.  Farley’s surprise turned to abject shock when he proceeded to receive “the most disastrous cussing out” he had ever received in his life.  Hull told Farley the Postmaster General in a single day “had undone a lifetime of good works” and demanded he leave Tennessee at once.  Farley was positively crushed and told a friend what had happened.  The friend replied, “Why, that wasn’t Hull.  I’ll bet it was I. D. Beasley.”  Beasley was summoned to the room of the Chairman of the Democratic National Committee and FDR’s patronage chief.  The embarrassed I. D. was commanded to perform his impersonation of Cordell Hull, which he promptly did.  Farley, a genial Irishman, was delighted and the two became good friends.

Senator Albert Gore was also a Smith County boy and received some political mentoring from I. D. Beasley.  Naturally, Gore also received more than a measure of the “I. D. Beasley treatment.”  When a very young man, Gore had asked a young lady to accompany him to the Lebanon Fair.  The girl said she already had a date, so young Albert was only too delighted when he received a telephone call from her saying she had changed her mind and preferred to attend the fair with him.  Albert Gore flew to her house and sat on the front porch with her parents, expecting her to come outside at any moment.  Eventually, the girl’s father said, “Albert, if you’re waiting for Sister, you’re out of luck.  She’s already gone to the fair with that boy down the road.”  Albert Gore immediately set out to find I. D. Beasley.

It was I. D. Beasley who helped Albert Gore become Commissioner of Labor during the first administration of Governor Gordon Browning.  It was Gore rather than Beasley who went to Congress in 1938 after the incumbent, J. Ridley Mitchell, lost a race for the United States Senate.  I. D. Beasley quite likely could have won the Democratic nomination to serve in the U. S. House of Representatives, but he refused to consider the notion of leaving Carthage and Tennessee.  Instead, Beasley supported Gore.  I. D. Beasley loved to travel, although he hated to fly, yet he couldn’t wait to get back home to Carthage whenever he was away.  At least one friend thought it was a very good thing Beasley never made it to Washington, D. C.  “Good or bad, there’s no doubt the world would not be in its present condition if Beasley had access to a hot telephone line to Moscow,” the friend said.

While I. D. Beasley never married, years after his death, it came to light he had kept company with a Nashville widow.  She recalled, “The 50 miles of road between here and Carthage is what came between us.”  Described as “loveable and gray-haired” when interviewed about I. D. Beasley, she remembered him fondly, shedding a few tears as she recalled him.  “He wouldn’t leave Carthage and I wouldn’t leave Nashville.  But don’t let anyone tell you I. D. Beasley wasn’t a good man, capable of love.  He loved everybody.”  The widow added, “But he ate too much.”

Attempting to control his weight, I. D. would curse the cottage cheese he was supposed to eat and would sneak into the kitchen to devour a plate of sausages instead on the last day of his life.  A friend drove him back home to Carthage where he died of a heart attack in his room at the Walton Hotel during the early morning hours the next day.

Beasley, “The Mockingbird of Capitol Hill” was only fifty-nine years old when he died on October 26, 1955.