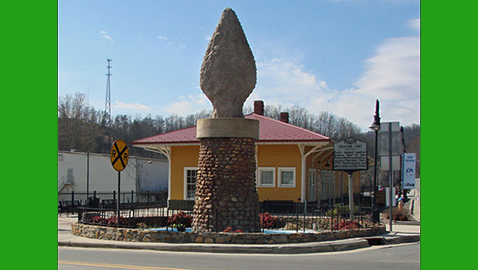 If you’re headed east on Interstate 40 beyond Asheville, North Carolina there’s one little town right off the interstate you should take the time to stop and visit.

Old Fort is aptly named. It began when George Davidson settled there and incorporated an old pioneer fort into his plantation. The place became the western boundary of civilized North Carolina. Everything to the west, including Tennessee, was across the Blue Ridge Mountains and held by Native Americans.

Old Fort was a starting point for brave and foolish adventurers. In the 1800s the railroad finally reached that little settlement and a resort spa and hotel was built on the mountainside by Sanborn Worthen, who also bought the old Davidson plantation. He created a railroad depot and set about luring wealthy families to his resort.

A fountain was created below the hotel in the meadow and water was piped from the mountain all the way to the fountain. The fountain became known as “Andrew’s Geyser” because it ran continually and spouted a stream of water high into the air. Today a trip north from the town by car eventually brings you to the fountain. There’s parking and picnic tables there and you can walk out to the “geyser” or look behind the fountain to where the former hotel sat high on the mountain beside the train tracks.

Back downtown you can’t help but see the Arrowhead Monument, a large granite rock built to remember the peace between the Cherokee and Catawba Tribes. Built in 1930 the arrowhead is the focus of the little downtown, which has the shops and tourist venues you’d expect. Davidson Fort, the Revolutionary Fort, is a reconstruction of the original.

Old Fort is immediately beside Interstate 40 and if you head south you’ll eventually come to Bat Cave, Chimney Rock Park and Lake Lure. Parts of the movie “Dirty Dancing” were filmed in that area.

Heading east from Old Fort is Marion, NC., the McDowell County Seat. The downtown is on the National Register of Historic Places and has the home of founder James McDowell, built in 1787. Just east of Old Fort is the Pisgah National Forest and its beautiful Catawba Falls. Parts of old Highway 70 have been opened by the state and McDowell County as a bicycle and foot trail there in the forest. Point Lookout Trail is a paved trail climbing 1000 feet in the Swannanoa Gap in a four-mile trip.

Old Fort has an annual Pioneer Day hosted by the Mountain Gateway Museum in April and the town is also known for their Octoberfest each year. Trout fishing is permitted, with a special $5 license, downtown along a section of Mill Creek bordering the museum at 102 Water Street.

During the season Old Fort also has weekly music concerts. A free bluegrass concert is held each Friday at the Rockett Building. The Welsford Parker Artz House and the downtown are listed on the National Register of Historic Places.

You can get more information on Old Fort, NC online at www.oldfort.org  or by calling (828) 668-4244. The little town could be a destination if you’re headed that way and certainly is worth a brief stop if you’re just passing by on your way to somewhere else.

Sometime brief stops every couple of hours can not only break up a road trip but also can be entertaining and educational. Be safe and take a rest stop occasionally.