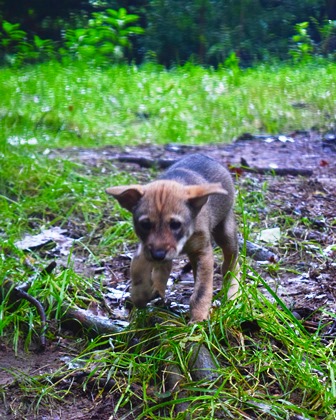 Zoo Knoxville’s wildly popular red wolf pup now officially has a name.  Waya, (pronounced WAH-hyuh), is the Cherokee word for “wolf” and received the most votes after the zoo asked the community to help christen him.

“The name Waya symbolizes the respect and connection East Tennesseans have with native wildlife and the culture of our native people.  We think the community has chosen well.  It is a noble name for such an important little pup,” says Zoo Knoxville President and CEO Lisa New.

The feisty male, born at the zoo on April 30 to parents Sunny and Saaron, now weighs more than 8 pounds and is playfully exploring his habitat daily.  The first red wolf born at Zoo Knoxville in 23 years, he immediately became a favorite animal with devoted followers on the zoo’s social media as well as with zoo visitors.

With fewer than 300 red wolves left on the planet, Waya is one of the most endangered animals in the world.  Red wolves are classified as Critically Endangered by the IUCN Red List of Threatened Species, which is widely recognized as the most comprehensive, objective global approach for evaluating the conservation status of plant and animal species.  There are approximately 200 red wolves living in accredited zoos and breeding facilities in the U.S. and they are managed as part of the Association of Zoos and Aquariums (AZA) Species Survival Plan, which is working to save these animals from extinction.