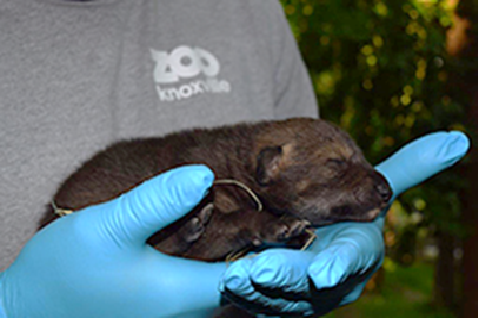 Zoo Knoxville is excited to announce the birth of a critically endangered red wolf.

The single male pup was born on Saturday, April 30th, to mother Saaron and father Sunny, both first-time parents.  He is the first red wolf pup born at Zoo Knoxville in 23 years.

Zoo staff are checking and weighing him regularly.  Milk production in a lactating female is determined by demand, and maintaining sufficient milk supply can be a concern when nursing a single pup, but he is steadily gaining weight and appears to be healthy and thriving.  The pup will stay in the den for three to four weeks before venturing out to explore his habitat.

Red wolves are one of the most endangered animals in the world.  They are classified as Critically Endangered by the IUCN Red List of Threatened Species, which is widely recognized as the most comprehensive, objective global approach for evaluating the conservation status of plant and animal species. Declared extinct in the wild in 1980, the only wild population in the world, comprised of approximately 50-75 animals, lives in a five county area on the Albemarle Peninsula of eastern North Carolina, where they were reintroduced in 1987.  This wild population may be in peril because North Carolina’s Wildlife Resources Commission has asked the U.S. Fish and Wildlife Service to end its reintroduction program and the state’s petition is currently being considering by the federal agency who will decide whether to keep the program, change it, or recall the animals into captivity.

There are approximately 200 red wolves living in accredited zoos and breeding facilities in the U.S. and they are managed as part of the Association of Zoos and Aquariums (AZA) Species Survival Plan, which is working to save these animals from extinction.