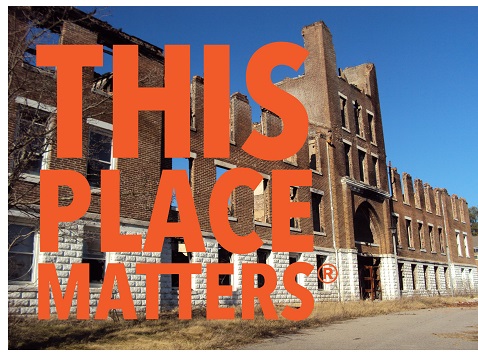 The East Tennessee Preservation Alliance is celebrating May as National Preservation Month by issuing a This Place Matters special focus on Morristown College. The National Trust for Historic Preservation’s “This Place Matters” campaign encourages people to celebrate the places that are meaningful to them and to their communities. Morristown College, which has been included on the East Tennessee Endangered Heritage list since 2010, was selected for a special focus this year because our organization feels it is important for everyone to remember why this place matters to our regional heritage.

Located atop a hill just northeast of downtown Morristown lies what is left of a once vibrant campus. The 52 acre site is still recognized as a National Register District by the State of Tennessee and the National Park Service. However, the past few years have not been kind. To see the site today would leave the casual observer wondering what happened and why such a site is fading away, both physically and in memory.

That observer might not know that Morristown College was one of only two institutions that African Americans could attend before the civil rights movement. It became a place of education for African Americans through the post-Civil War, Great Depression, Jim Crow, and post-Civil Rights eras. Over 15,000 graduates count it as their Alma mater.

Founded in 1881, the school received much outside support from northern states and freedman’s relief organizations. Early on, Judson Hill was appointed president, serving in that position until his death in 1931. Hill, a Methodist minister from New Jersey, was described as “a symbol of interracial harmony, a good-will ambassador who kept the school financially solvent”. Hill raised funds from a variety of sources, including prominent philanthropists such as Andrew Carnegie and the Kellogg’s of Battle Creek, Michigan.

At the center of the early campus had been old slave mart. In 1860, Andrew Fulton and his mother were sold at the auctioneer’s block there. After the civil war, Fulton would return, but this time to go to school and later join the faculty. His story is one of many about how Morristown College played an important role in developing the lives of its students.

Morristown College enjoyed solid growth through the early 20th century. Graduates could be found working in several countries. Nearly half of the black ministers at the Eastern Tennessee Methodist Conference had been students at Morristown College. In 1914, the school started a program recruiting men from Africa—becoming much more international and culturally diverse.

Morristown College was at its height in the 1920’s when the student body had grown to over 400. The death of Hill along with the Great Depression put a halt to this growth, for a while. It entered a second period of growth under Miller W. Boyd in the 1940’s. Places change with time and after the civil rights movement African Americans were able to attend the colleges and universities that they had been previously barred from. From that point on Morristown College began to enter a period of decline. It was too difficult to compete with state-supported colleges and universities. By 1989, Knoxville College acquired Morristown College and began operating it is a satellite campus. However, Knoxville College had its own financial difficulties and Morristown College was finally closed in 1994.

The site eventually was auctioned and the new owner failed to secure and maintain the buildings. Vagrants frequented the site and vandalism was rampant. In 2008, the c. 1881 Kenwood Refectory (cafeteria building) burned. It was the center piece of a three building complex, connected to dormitory buildings by brick and barrel-vaulted arcades. In 2010 it was the Laura Yard Hill Administration Building’s turn to burn. Bricks for the iconic campus centerpiece were handmade on site. Ownership has since changed hands again and the Knoxville-based development firm Henry and Wallace is proposing to pursue commercial, civic, residential and assisted living uses for the campus site.

The East Tennessee Preservation Alliance encourages any redevelopment of this site to take into serious consideration Morristown College’s contributions to history. It is a site worthy of being preserved and has an interesting story to tell. A wonderful resource for the school’s history is a publication titled A School for Freedom: Morristown College and Five Generations of Education for Blacks, 1868-1985. Edited by Jo Vita Wells, A School for Freedom was the result of a unique community history project sponsored by the East Tennessee Historical Society with funds provided by the National Endowment for the Humanities. A PDF version is available at www.knoxheritage.org/etpa.

About the East Tennessee Preservation Alliance

The East Tennessee Preservation Alliance works to preserve the structures and places with historic or cultural significance in Anderson, Blount, Campbell, Claiborne, Cocke, Grainger, Hamblen, Jefferson, Knox, Loudon, Monroe, Morgan, Roane, Scott, Sevier, and Union counties. ETPA partners with Knox Heritage to serve as the regional arm for preservation activities in these 16 counties, is supported by local leadership from each county, advocates on behalf of historic preservation, collaborates with regional partners, educates on the importance of preservation and seeks solutions for challenging preservation issues.