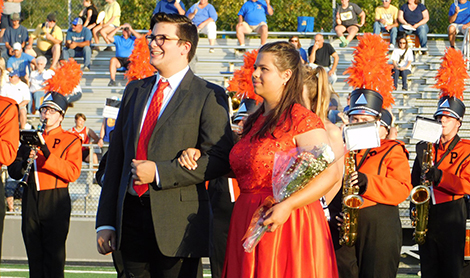 Looks a lot like Clark Kent doesn’t he?  Well at Powell High School’s 2018 Homecoming he was nothing short of a real life Superman.  You can’t tell it from the picture but if you look closely, although he looks sharp and dapper, he is a bit disheveled.

Katie Johnson, along with all of the homecoming candidates, was lining up before the festivities and crowning of this year’s Homecoming Queen.  Taking photos, fixing hair, anticipating who the winner might be; everyone perfectly paired up with their distinguished escorts.  Accept Katie’s.  For whatever reason that we never discovered, her escort had not yet arrived.

So what would Superman do?  He would jump into his phone booth and save the day!  Which is exactly what Sawyer did.  He “flew” to the Drama and Chorus department to look for a suit and dress shirt.  Found one that would work although it didn’t quite fit.  Dug a red tie out of the props and with the help of Cara “Momma” Marshburn and one of the PHS Singers to help tie it, he quickly changed and “flew” back up to where the court was lining up in time to jump in and escort Katie onto the field.

Sawyer said, “All I did was step up to the plate! I wasn’t about to let her walk on her own!”  So next time you are in Cracker Barrel on Central Avenue Pike and you happen to see a greeter who has a striking resemblance to Clark Kent, look closely… you might get a glimpse of his cape sticking out under his apron.