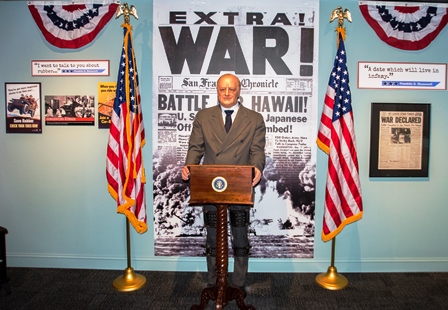 Pearl Harbor is the first three-gallery changeable exhibit that Ripley’s Aquarium of the Smokies has installed. Pearl Harbor is an interactive and educational exhibit on the history of the date which will live in infamy! See, hear and interact throughout the entire exhibit as you go through the timeline of world events leading up to the attack on Pearl Harbor. Experience, first hand, the environmental impact that continues to this day, 75 years later.

The Pearl Harbor exhibit features models of ships and planes, an interactive map of the attack, life-sized figure of President Franklin Delano Roosevelt, a crawl through replica of the USS Arizona BB-39 Forward Magazine, a theater with memorabilia from the 1940s, as well as various aquatic animals native to Hawaii and invasive species now living in Hawaii that were brought in from the Japanese ships during the attack.

“We are excited that we have the opportunity to create and feature such an amazing exhibit about U.S. history and in honor of our military. Ripley’s has always been and continues to be a huge supporter of all our military personnel as well as their families that sacrifice so much,” said Ryan DeSear, regional manager of Tennessee and South Carolina.

Ripley’s Aquarium of the Smokies, Ripley’s attractions and Guinness World Record Museum in Tennessee offer 50% off for military personnel and 30% off for all dependent family members year round.

Ripley’s Aquarium of the Smokies, the second most visited attraction in Tennessee, has been voted one of the Top 5 Aquariums in the USA & the world by TripAdvisor Travelers’ Choice in 2014 & 2015, Top Destination to See Penguins by USA Today and Forbes Traveler named it one of the America’s Best Aquariums. Thousands of exotic sea creatures live in its 1.4 million gallons of water. The aquarium is known for its amazing shark exhibit that features 11-foot sharks and one of the most spectacular underwater tunnels in the world.

Ripley’s Aquarium of the Smokies is part of the Ripley Entertainment family of worldwide entertainment facilities. More than 13 million people visit Ripley’s 60-plus attractions in 11 countries each year.

The aquarium is located at traffic light #5 on the Parkway in Gatlinburg, Tennessee and is open 365 days a year.

For information: call 888-240-1358 or visit www.ripleysaquariumofthesmokies.com.