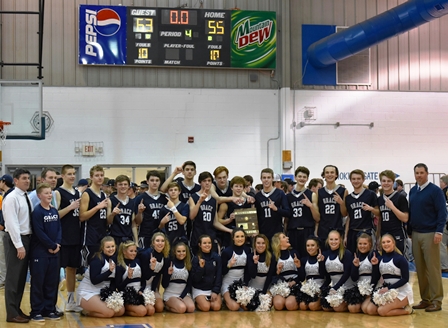 The Rams held off Meigs County 63-55 in Thursday night’s championship game at Wartburg.

GCA (21-11) will host Cosby in the sectional round tonight at 7, with the winner earning a berth in next week’s TSSAA Class A state tournament at Murfreesboro.

With the victory, the Rams avenged a 69-66 loss to Meigs County in the District 3-A finals.

“Keys of the game were for us to eliminate penetration as best we could and rebound the ball, eliminating second-chance points for them,” said GCA head coach Mike Doig via e-mail. “We accomplished those goals by holding a great Meigs County team to only 30 points in the first three quarters.”

Grace Christian led 43-30 at that juncture.

“Then Zy Moore took things in his own hands and nearly got it done for them,” added Doig, “but we were able to make some really great plays by attacking the basket by Zack Walker and CJ Gettelfinger.

“Windham hit some clutch 3-point shots for us. Great team defense along with being 14 of 19 from the free throw line helped seal the deal.”

Moore finished with 21 points as the Tigers tallied 25 points in the fourth period to get back in the game.

Meigs County will travel to Hampton in upper East Tennessee for its sectional game. Hampton defeated Cosby 74-54 in the Region 1-A finals.