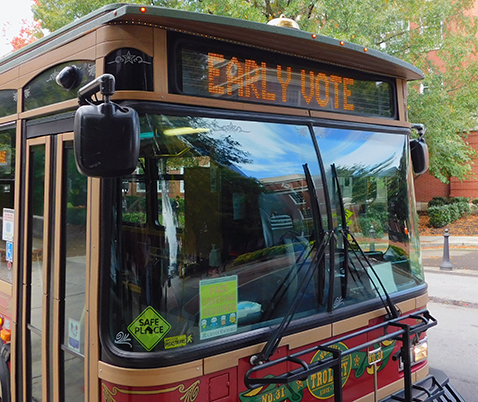 Through the sixth day of early voting in Tennessee, 1,085,384 voters have cast their ballot for the Nov. 3 presidential election.

“The massive turnout shows Tennesseans’ confidence in the safety precautions taken by county election commissions,” said Secretary of State Tre Hargett. “As I visit early voting sites across the state, I continue to see elections officials doing a great job helping voters cast a ballot in a smooth and efficient process.”

Statewide, there is nearly a 47 percent increase of in-person and absentee by-mail voters compared to 2016, with each county reporting higher numbers than ever before.

“At this rate, we are on pace to break the state’s previous early voting turnout record, set during the last presidential election,” said Coordinator of Elections Mark Goins.

Tennessee voters can find their early voting and Election Day hours, polling locations and more with the GoVoteTN app or online at GoVoteTN.com. The GoVoteTN app is free to download in the App Store or Google Play.

While visiting the polls, Tennesseans are encouraged to wear a face covering and maintaining a six-foot distance from poll officials and other voters.

Voters planning to vote early or on Election Day will need to bring valid photo identification to the polls. A Tennessee driver license or photo ID issued by the Tennessee Department of Safety and Homeland Security, Tennessee state government or the federal government are acceptable even if they are expired. College student IDs are not acceptable. More information about what types of ID are acceptable can be found on sos.tn.gov or by calling toll free 1-877-850-4959.

Tennessee state law requires polling locations and the area within a 100-foot boundary surrounding each entrance to remain campaign-free zones. This includes the display or distribution of campaign materials and the solicitation of votes for or against any person, party or question on the ballot in these areas. Voters wearing campaign-related clothing or paraphernalia will not be allowed within the 100-foot boundary.

For more information about early voting in Tennessee, go to GoVoteTN.com or call the Division of Elections toll-free at 1-877-850-4959.