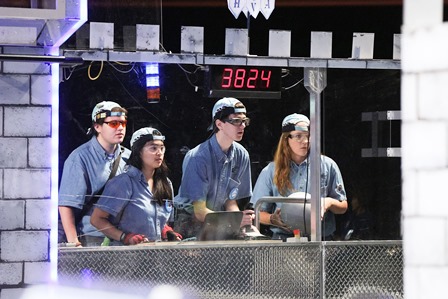 Hardin Valley Academy’s FIRST Robotics Team 3824 earned its second consecutive championship at the 2016 Smoky Mountains Regional, which was held March 31-April 2 at Thompson-Boling Arena. As regional champion, the HVA RoHAWKtics will compete against 600 teams from around the world at the 2016 FIRST Robotics Championship in St. Louis the week of April 27-30. HVA is a public high school located in Knoxville, Tennessee. The HVA team must raise 30K to fund its travel to this international competition and is offering sponsorship opportunities.

In FIRST Robotics competitions, more than 3,100 teams of high school-age students in 24 countries receive game rules, robot guidelines, and a parts kit in early January, then have six weeks to design, build, and program a robot that can accomplish a series of tasks that earn points in a competitive game. At the 2016 Smoky Mountains Regional, 50 teams from 12 states competed in a series of 10 qualification matches. The top eight teams then selected two alliance partners. As the number two seed at the end of these matches, the HVA RoHAWKtics team had to select two teams and form an alliance (a team of three robots), which then competed in a series of best-of-3 elimination matches. They captained an alliance with teams from Illinois and Nashville and upset the top seeded alliance and set the 2016 SMR high score  of 210 points in the final round.

The HVA team, founded in 2011, won the Rookie All-Star and the Highest Seed Rookie Awards at the first Smoky Mountains Regional. Since then, the team has won five regional championships, been a regional finalist, and become a division finalist at the international competition.

Sponsorship by Oak Ridge National Laboratory’s Manufacturing Demonstration Facility has enabled HVA students to learn about the latest in additive manufacturing technology. This expertise has led to invitations to showcase its robots at the 2014 White House Maker Faire, national manufacturing conferences, and numerous public appearances promoting STEM education. At the 2016 Smoky Mountains Regional, the HVA RoHAWKtics team also earned the Excellence in Engineering Award sponsored by Delphi for its robot, nicknamed Pultruder because of the fiberglass technology called pultrusion that teens learned to use in order to make the robot more robust for this year’s competition.