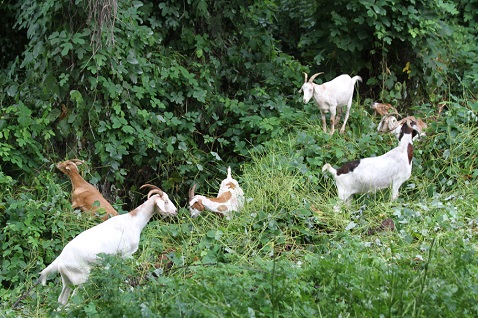 The City of Knoxville has once again called upon a herd of goats to rescue a park from the plague of the invasive exotic plant, kudzu. The goats are currently chewing their way through parts of Fort Dickerson Park and will eventually head over to City-owned property along Williams Creek.

“The goats are a great alternative to removing a prolific invasive exotic plant, using the least amount of chemicals possible,” said Mark Wagner, Horticulture Service Manager. “It’s a symbiotic project – the goats enjoy a nice meal as they would on any other day, while at the same time, they make headway against a problematic plant.”

Once the goats eat through large amounts of the kudzu, City crews come behind and spray the exposed roots to prevent regrowth of the kudzu plant, which can grow up to one foot per day.

“It’s much more effective to have the goats take most of the plant’s foliage out and then get chemicals on the exposed root,” said Wagner.

This year marks the third installment of the goats combating kudzu in Fort Dickerson Park. This year’s project cost $12,200 and was paid through the Public Service Department’s operating budget.

Originating from Asia, kudzu has been a problem for Southern indigenous plants ever since it was marketed to farmers in the first half of the 20th century as cattle food and for erosion prevention and landscaping. However, locals quickly discovered that the South’s winter seasons don’t reach low enough temperatures to keep the plant at bay, and kudzu has been a problem ever since.

“The problem with invasive exotic plant species is that they grow over and smother plants native to our region,” said Kasey Krouse, the City’s Urban Forester. “Without preventative measures from horticulture experts and the general public, species such as kudzu could theoretically dominate Knoxville’s foliage scene in the future.”

The goats are contracted from Whistle Pig Farms and are kept within City park boundaries through electric fencing. Locals are welcome to view the goats as they work in Knoxville’s parks but are encouraged to keep a distance. A herding dog that is trained to defend the goats from predators and human interference watches over the goats at all times.