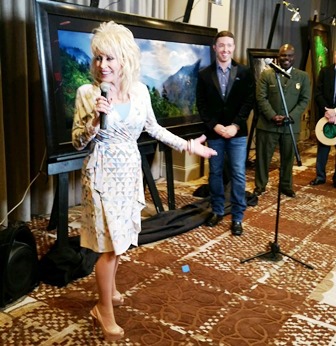 Exhibit at DreamMore Resort, Book Proceeds to Friends of the Smokies

Today, at a media event at Dollywood’s DreamMore Resort, Tri-Cities artist Benjamin Walls announced the release of his new book entitled “Beyond,” which will include a foreword written by entertainment icon Dolly Parton.

Beyond is a compilation of Walls’ best work and will feature all of his museum-exhibited pieces. It has taken Walls 12 years, one million miles of travel, and 300,000 exposures to capture the images featured in Beyond.

The book, which will begin shipping to clients in November, is available now through the Benjamin Walls Gallery and at www.BenjaminWalls.com at a special pre-publication price.

At the press conference, Dolly Parton toured Benjamin’s on site exhibit and expressed her interest in his work. “I paint the Smoky Mountains in words” Parton declared, “And you do the same with your camera.” Cassius Cash, Superintendent of the Great Smoky Mountains National Park, expressed his enthusiasm for Walls’ work and helped him unveil a new image entitled, The Smokies, as Benjamin shared the story behind his inspiration with the crowd.

Benjamin Walls has exhibited his work at the Smithsonian and the Natural History Museum of London and this summer he will be the first Tri-Cities artist to have a solo exhibit at the Tennessee State Museum in Nashville. His work has also found a home in the galleries of noteworthy collectors ranging from Grammy Award-winning musicians to Fortune 500 CEOs.