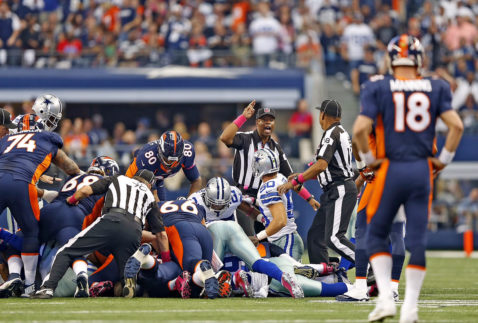 Gratitude filled Terry Brown’s thoughts when he found out he was going to be inducted into the Greater Knoxville Sports Hall of Fame.

The longtime official was very appreciative of being among what he called a “magnificent” 2019 class of inductees, and he reflected too on the previous “celebrated” classes he would be joining.

“But, most importantly, I have a great deal of respect for the body of members that makes up this prestigious (selection) board,” stated Brown recently. “Because I too served on this board once upon a time, and therefore recognize and understand the considerable thought process, hard work and dedication that contributes to each induction class. Decisions I know are not always easy.”

Making split-second decisions on football’s biggest stage for 13 seasons played a huge part in Brown’s selection for this year’s Hall of Fame class. He is one of a very few with ties to Knoxville who have made it to the National Football League in black and white stripes.

According to NFL Official Statistics, Brown has worked 190 games since 2006, including being the field judge in the 2019 AFC Championship game that matched the New England Patriots against the Kansas City Chiefs at frigid Arrowhead Stadium.

Many University of Tennessee fans first got to know Brown, a native of Macon, Ga., as a four-year starter in the defensive secondary (1983-86) and a member of the “Sugar Vols,” who walloped the Miami Hurricanes 35-7 in one of the school’s greatest all-time wins and finished ranked No. 4 in the nation.

Brown, who started calling high school football and basketball games in 1990, believes his experience as a player has helped him in officiating.

“I certainly think playing collegiate football at its highest level does add a much needed benefit to officiating,” he said. “I can anticipate or expect specific plays – sometimes based on down and distance, as well as certain particular formations.”

Brown noted too that officiating crews consider themselves the “third team” on the field, but prefer to be as inconspicuous as possible.

“We understand no one pays to watch officials,” he added. “But think for a moment what a game would be like, if referees were not there to govern them?

“Remember, I was once a player first, and most players feel it’s better to cheat – than get beat …”

Brown, who also worked college basketball games in his career, has learned how to deal with rude fans.

“Unfortunately, fans consider sports arenas as an opportunity to yell and criticize officials,” he said. “So many fans have this erroneous misconception that demeaning officials is part of the game. I beg to differ!

“We are proud of what we do, and we have enough fortitude to overlook and work hard at not taking the words of fans personally.

But over the years Brown has found a way to make it a little easier.

“I remind myself ‘Love Conquers All!’ … My love for the game conquers all the criticism from them that cast stones!”

In addition to his outstanding officiating career, Brown has played a meaningful role in many young lives through the years, working for the Knox County Juvenile Court, where his current job title is Court Director / Hearing Officer.

JOHN MICHELS, who died in January, was named the winner of the “Buck Vaughn Legacy Award” at the 38th annual ceremony. The UT guard was a consensus All-American in 1952 and won the Jacobs Trophy as the outstanding blocker in the SEC. He was inducted into the College Football Hall of Fame in 1996.

Michels also was an assistant coach for the Minnesota Vikings for 27 years.