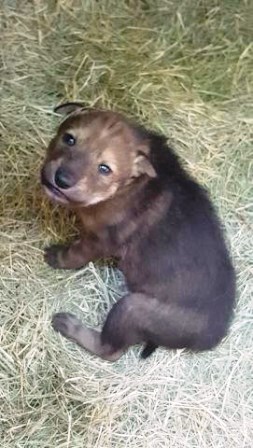 Zoo Knoxville is inviting the community to choose a name for the first critically endangered red wolf pup born at the zoo in 23 years.

The zoo received more than 2500 name suggestions for the feisty male, who was born on April 30.   After narrowing the list down to four final choices-Rufus, Uno, Waya (pronounced WAH-hyuh) and Mozart-the zoo is inviting the community to vote for their favorite.  After tallying the results, the pup will be officially christened with the most popular name.  Voting begins today and will continue through Sunday, June 12, 2016.  Votes can be cast at https://www.surveymonkey.com/r/redwolf or through links on Zoo Knoxville’s Facebook page and web page, zooknoxville.org.  The winning name will be announced on Monday, June 13, 2016.

The one-month-old pup is just beginning to venture out of his den and explore his habitat under the watchful eyes of his parents, mother Saaron and father Sunny.  The now-six-pound pup is healthy and thriving, and often growls and barks at his keepers when they get too close for his liking.

Red wolves are one of the most endangered animals in the world.  They are classified as Critically Endangered by the IUCN Red List of Threatened Species, which is widely recognized as the most comprehensive, objective global approach for evaluating the conservation status of plant and animal species.  There are approximately 200 red wolves living in accredited zoos and breeding facilities in the U.S. and they are managed as part of the Association of Zoos and Aquariums (AZA) Species Survival Plan, which is working to save these animals from extinction.  Fewer than 300 remain on Earth.