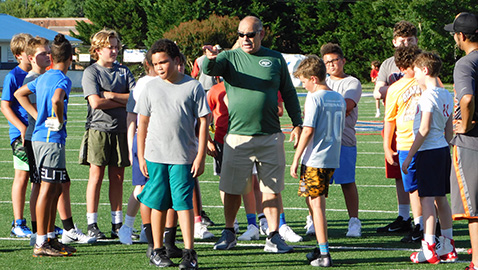 About four miles from where he was the defensive coordinator in Tennessee’s 1998 national championship season, Chavis walked onto West High’s field last Tuesday to coach West’s middle school team in its first practice after the dead period.

Before the defensive drills started, Chavis, 63, had already demonstrated the technique for stripping the football out of the hands of a would-be ball carrier.

“No, I won’t be doing things differently than I have been doing,” he said when asked what his approach would be for coaching sixth, seventh and eighth graders. “Make sure they have fun and make sure I have fun. That’s the objective.”

Jeff Francis, head coach of West’s first season in the local middle school league, was quarterback at UT (1985-1988) right before Chavis, nicknamed “The Chief,” joined the Vols’ coaching staff in 1989.

Francis, who spent time as a sideline reporter on the Vol Network starting in 2007, tipped off this reporter a couple of weeks ago that a “big story” could be on the horizon.

Chavis, a longtime Knoxville resident, lost his defensive coordinator job at Arkansas last season after Razorbacks head coach Chad Morris was fired. With his credentials, there was still a possibility Chavis might land another college job or an offer in the NFL.

Chavis immediately blended in with other assistant coaches at the beginning of the Rebels’ two-hour practice and later was asked if he was committed to being with the West team all season.

What did he hope to accomplish with this team?

“To share with these kids and give back,” he said. “That’s what it’s all about.”

Often during the tackling drills without pads, Chavis reminded the boys to “keep eyes up” for safety reasons.

“That’s just basic fundamentals and that’s what you want to do,” he said. “I’ll teach them to play the game safely. That’s the first step. Be safe playing the game and tackling because it is a contact sport.

“And I keep saying this – Make sure they have fun. They need to be enjoying the game.”

Chavis said there are a lot of fundamentals that can be taught and he won’t change his coaching ways. “I’m going to teach them as much as they can handle.”

Chavis came to UT in 1975 as a walk-on defensive lineman from Dillon, S.C. Bill Battle was his head coach the first two years. He earned a scholarship at the end of the 1977 season – Johnny Majors’ first year as the Vols’ head coach – and became a starter in his senior season in 1978.

After coaching at Alabama A&M and Alabama State, he returned to UT in 1989 as a defensive line and linebacker coach for Majors.

Chavis would coach at Tennessee for 20 years and was promoted to defensive coordinator by Phillip Fulmer in 1995 and named assistant head coach in 1999.

Following the 2006 season, Chavis was chosen the Assistant Football Coach of the Year by the American Football Coaches Association.

Even in Fulmer’s last season as head coach at UT in 2008, Chavis’ defense was ranked No. 3 in the nation and first in the SEC in total defense.

Chavis wasn’t formally introduced to the West team at the start of practice. The young players didn’t know who he was or his past.

“I would prefer it that way,” said Chavis. “I’m just a guy out here helping.”

When the team huddled up after practice, Francis quietly mentioned to the players that Chavis would be working with the defense and linebackers.

“I’ve never heard of him,” joked Francis when asked about Chavis on his way to a parent meeting. “We got him off the waiver wire on the cheap.

“Seriously, “it’s great (to have him). I mean, you look at his record and what he’s done. The number of guys that he’s put in the NFL, the great players he’s coached and recruited, the big games he’s been in …”

And then kidding again, Francis added: “I’m worried because we play Gibbs that first game … and he won’t be able to handle it.”