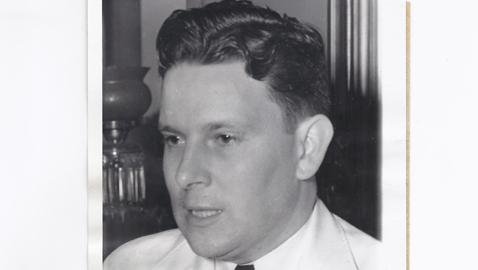 From the author’s personal collection.
Congressman Albert Gore in 1942

The name Gore conjures in Tennessee thoughts of former Vice President Albert Gore, Jr., but his father was a very successful politician in an age when it was a more respectable profession and the rough and tumble of Tennessee politics was hard fought.

Albert Gore, Sr. represented Tennessee in Congress for thirty-two years, either in the House of Representatives or the United States Senate.  Gore was born the day after Christmas in 1907, one of five children to Allen and Maggie Gore.

While still Superintendent of Smith County schools, Gore would frequently stop in the old Andrew Jackson Hotel in Nashville to have a cup of coffee before returning home, which is where he met the future Mrs. Gore.  Gore was attending the Y.M.C.A. law school and he later recalled the coffee didn’t taste good unless it was served by a particular waitress, which just happened to be Pauline LaFon.  Evidently, Albert Gore enjoyed excellent coffee for the remainder of his life, as the two stayed together until Gore’s death.

While Huffines might have been friendly, he candidly told Gore he wouldn’t place him in a job inside Smith County lest he defeat him in the next election.

Without a teaching position, Gore’s economic condition became, in his own words, “embarrassing”.  He stood in line for a job interview for the better part of a week without even being interviewed.  Finally, Gore accepted a job selling door-to-door.  Gore was earning $12.50 a week from his new job and still managed to save a little money with which he bought and sold tobacco.  Money was still so tight, Gore would give a farmer a check at the last possible moment and hurry to the bank to urge the banker to slightly delay cashing his check.  Gore’s industry and hard work paid off and he pocketed an extra $1,000 during the worst of the Great Depression.

Albert Gore later laughed that his tobacco earnings were “burning a hole” in his pocket and used the money to purchase a farm in Carthage, which he kept for remainder of his life.  It was a wise investment for the budding young politician.

It was in 1933 that Albert Gore made his first visit to the nation’s Capitol.  Gore took the train to Washington, D. C. carrying a pasteboard suitcase made to resemble the much more expensive leather suitcases of the time.  Unfortunately, Gore was caught in a torrential rain on the way to his room in the Dodge Hotel.  The rain washed away the veneer of Gore’s little suitcase and even worse, it came apart.  Gore arrived at his hotel carrying all his possessions.

Albert Gore hurried to the Capitol the next morning to visit his own Congressman, John Ridley Mitchell.  Gore received the typical Mitchell greeting, warm and hearty.  Mitchell was careful to inform Gore just how much he respected the younger man’s father and family.  Mitchell gave Gore a pass to the House Gallery, where a fascinated Gore spent several days observing the doings of the Congress.

Shortly after Albert Gore returned home to Smith County, Superintendent Lee Huffines was discovered to be suffering from a terminal form of cancer.  Huffines had been Superintendent of Smith County schools since 1915 with but one four-year interruption.  Huffines’s reign as Superintendent had not been without controversy and he had not made everyone happy throughout his tenure.  The Superintendent had faced numerous opponents previously who had made him the issue in the campaign and he had truly appreciated young Gore’s decision to campaign on the issues rather than personalities.  As he lay dying, he asked his friends and allies to insist that Albert Gore be appointed by the County Court to serve as his replacement.

Gore was soon involved in state politics and was named campaign manager for Congressman Gordon Browning’s bid to unseat U. S. Senator Nathan L. Bachman in 1934.  Browning lost, but ran a respectable race.

Despite having opposed Senator Bachman, Tennessee Democrats made an effort to unite the party for the fall campaign.  Gore was selected to head the speaker’s bureau for the general election.  Gore showed considerable ingenuity and political skill by sending Fourth District Congressman J. Ridley Mitchell out to speak in the larger cities.  Mitchell, clearly having statewide ambitions, enjoyed the attention from local media, giving him more exposure to potential voters, but it also kept Mitchell outside his own Congressional district.  Those speaking assignments were filled by Albert Gore, who, not surprisingly, began being mentioned as a future candidate for Congress.

Gore’s support for Gordon Browning was remembered when Browning was elected governor in 1936.  Governor Browning invited Gore to serve in his Cabinet as Commissioner of Labor, an appointment Gore immediately accepted.

The Browning administration was controversial and would ignite one of the fiercest fights in Tennessee’s political history.  The 1938 campaign would determine the faction of Tennessee’s Democratic Party which would dominate the state for years to come.  Albert Gore managed to avoid most of that, having resigned from Browning’s Cabinet to run for Congress.

The Congressman from Tennessee’s Fourth District was John Ridley Mitchell.  Mitchell had been highly popular inside his Congressional district after first winning election in 1930.  Mitchell was reelected in 1932 by beating a longtime incumbent when their districts were merged following redistricting.  It was a considerable feat and one that demonstrated Ridley Mitchell’s political skills.

In one of his autobiographies, Albert Gore mentioned that Ridley Mitchell was the sort of politician who could promise every constituent a new post office and then make that constituent happy when the promised post office never materialized.

In 1938, the seat in the United States Senate held by Nathan L. Bachman was open, as Bachman had died unexpectedly of a heart attack in April of 1937.  Governor Browning had appointed George L. Berry to the Senate and Congressman Ridley Mitchell entered the special election in 1938, leaving his Congressional seat open.

Albert Gore entered the Democratic primary for Congress in 1938 and faced a host of opponents.  Perhaps the most formidable opponent contending for the nomination was John Jewell, a state senator who had run a strong race against Ridley Mitchell in 1936.  C. D. Lamb, another candidate with a local power base, proved to be a strong candidate as well.

Money, one of the key ingredients for any successful campaign, was usually scarce whenever Albert Gore was running for office.  He and his wife Pauline scraped together whatever they could and Gore’s campaign for Congress was highly personal, with the candidate visiting every county in the district repeatedly.  Only thirty-one years old when he first ran for Congress, Gore could claim experience as Superintendent of Smith County schools as well as his brief tenure in the Cabinet of Governor Gordon Browning, but several of his opponents had records from their own time in public office.

Gore was an accomplished fiddle player and he toted his fiddle with him everywhere he went during the campaign for Congress.  Gore would entertain rallies as well as whoever happened to be in a country store at the crossroads of a particular county.

While readers today are likely familiar with the campaigning of Gore’s son, the two might have the same name, but the father was, I think, by far the superior campaigner.  Albert Gore, Sr. was an excellent speaker, possessed a winning smile, and was adept at winning friends through personal contact.  There was nothing dull or leaden about Albert Gore, Sr.

Gore largely managed to avoid being caught up in the fierce battles for governor and U. S. senator that year, despite his connection with incumbent Governor Gordon Browning.  Gore won the Democratic nomination for Congress, beating out his nearest competitor, John Jewell, by more than 3,000 votes.  The Fourth District covered a large territory and was composed of eighteen counties; Gore carried eight of them to win.

The Republican Party was not a factor inside the heavily Democratic Fourth District.  Albert Gore was in essence, the new Congressman from the Fourth District even before the ballots were counted in November.

Albert and Pauline Gore, along with their young daughter Nancy, were off to Washington, D. C.